He stands four-square, his big head slightly lowered, floppy ears akimbo and his great dark eyes tilted up, focused entirely on me.

"Come!" I command, in the sharp authoritarian tone of voice I've been taught to use by the professional trainers. Sometimes it works, sometimes it doesn't. Now, again, in a slightly higher tone, "Come, Carter, come!" And I crouch a bit, arms wide, a big smile on my face. Oh, that gets his engine running! Here he comes, galloping straight at me, thinking no words, expecting no thing: Perfect enthusiasm and trust on four legs.

"Goodoggoodoggoodaaawg," I enthuse, rubbing his head, his shoulder blades, his broad white chest. "gooooooddog!"
Carter is my first dog.

He is not my husband FF's first , though. FF was brought up with dogs, had dogs in his previous marriage, and indeed has certain dog characteristics himself, all of them positive, like loyalty and razor sharp intuition about how I am feeling in any given moment. How did the word 'dog' come into negative use in modern parlance anyway? It's a usage based on sexual politics and invented, I believe, by people who don't understand dogs and are apt to abuse them.  Thanks to Carter, to me the word 'dog' is synonymous with the word 'good'.

I spotted him on a flyer in one of our local diners and was mysteriously and immediately attracted to his big black nose and huge dark eye sockets. A few days later, I was overwhelmed with emotion as I sat on the floor of his foster family's apartment with all 48 pounds of him seductively curled in my lap, leaning his great heavy skull against mine, breathing and snuffling into my ear.  I was utterly taken by him as I have rarely ever been taken by another living being, with no words exchanged, only a kind of Super Soul Meet in which I understood that this creature was utterly innocent and one hundred percent good. When we returned to our car that night without him, I burst into tears: There was no other option than that Carter should come to live with us.

Carter is about a year and a bit old. He was rounded up by Animal Control here in Piedmont, lived in an Animal Control shelter for a while, and then was boarded by a foster family for six months.  He owes his life to an unbroken chain of generous humans who quietly fought for him and believed that he ought to keep on living. He has had three names in the course of his short existence, so we let him keep the last one they gave him to spare him more changes. He's good-looking and smart, and we can't quite figure out how it is that he managed to stick around without being adopted for almost six months: He was waiting, apparently, for us. He was waiting for me.

Carter is a great dog; he is also a clear sign of my successful breakup with New York. It would have been both impractical and also unkind to keep this jumping, running, digging tribute to animal grace in a fourth floor walk-up apartment. Furthermore, we never would've found a dog like Carter in New York City: this mix-up of Akita, bull terrier, and typical Southern hound dog is a product of the liberal propagation of dog genes that occurs only in wider spaces and warmer climates. Carter, FF, this house and this garden are the tap roots I am  sinking down, the visible artifacts of a decision made to become part of this place that is so very far away from the winter cold of Tiny Town, so very far from the hard, punishing surfaces of Manhattan where I strove for so many years. I look around me at the evidence of the work we've been doing here in the house and on the property and I know I've made some intelligent decisions lately.

I hear Carter's trademark shake in the other room: 7, exactly 7, shakes of the head and body that make his dog tags jingle-jangle. He's letting us know he's on the move, making sure where we are, checking what's going on outside. During these last two and a half months of forming our pack of three, Carter has come to see FF and me as his leaders, the givers of all good things, of all correction and praise. He wakes us in the morning, and he doesn't go to bed until he knows we've retired too, no matter how sleepy he is.  He greets us when we return home with sustained enthusiasm evident in every tensed and quivering muscle that wants to jump up but has learned not to; he follows us down to the TV room at night, curling up between us and falling into a contented sleep. He knows what good is: praise, food, sleep, running, digging, sunshine, play, being together with the pack. 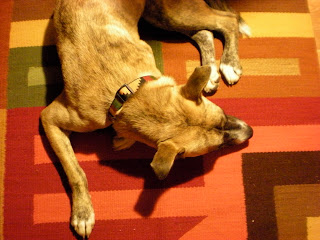 They say dogs don't think. Not like you and I do, anyhow. But Carter thinks and I know he does because we watch him trying to decide if he's going to obey a command he knows -- or not; we see him design squirrel catching strategies of different types and then modify them when they don't work; and his quick cleaving to our daily routines shows me his brain is working just fine. What he doesn't do is worry about tomorrow, dwell on the yesterday or have moral dilemmas. Training him requires me to be aware of his enviably straightforward world view, and be utterly connected to what can be understood without language; no assumptions can be made, consistency and clarity are the foundation of our relationship. Carter gives me big clues about how I might be a better friend and a better person.

Carter is also, oddly enough, helping me to become a better language teacher. In the first month or so of training him, I had regular epiphanies about how to work better with my students and I started to emphasize techniques I was using with Carter in my work with the human students.  Among these techniques are:


I already knew these ideas from 20-plus years of teaching, but Carter is helping me become more careful still because, unlike my human students who have an ego involvement in trying to be right, he invariably and shamelessly shows me immediately when I've screwed up as a teacher. Watching him, I've become more alert to my students' expressions and body language to figure out when I need to make an adjustment.

Carter is out in the yard now, enjoying the bright Piedmont sun, still trying to catch a squirrel. It's been two and half months and he hasn't caught one yet, but still he tries. I wonder at his optimism, his ability to remain stock still for as much as 15-20 minutes. Soon, I'll go out and we'll play a game in the backyard, and once again his doggy world will blend with my human one, each soul become finer for the time spent together.

Wonderful blog sharing by your. Its really write great about of this blog. I don't know how to say thanks.