A walk ends, a journey begins.

By now, Dog and I know most of the forest paths around here. Early Saturday morning, we decided to walk the distance down the hill, past the old mill, under the train trestle, and down to where the river cuts a gash through the forest, and a friendly path wends its way across wooden bridges and all the way to downtown to where the farmers' market is on weekends.

On our way, we found a fairy castle.

We strolled in through the front door, and entered another dimension. I felt as if the outside world were melting away, and the air itself growing denser and syrupy, the way it used to in dreams when I discovered I had a talent for flying. I checked myself for anxiety, but couldn't detect any.  I only felt very curious. What would happen next? There was a slight humming in my ears. Dog was curious, too, and noted to me that lots of birds were nesting in the sticks. In fact, there were thousands of them within the walls of the castle, all chattering to each other, excitedly doing their bird business. Their combined voices sounded like a symphonic orchestra tuning up.

Dog and I looked out of each and every window, including the oculus, the one pointing towards the sky. We were peering hard as if expecting something to turn up: a giant, a troll, a unicorn, Don Quixote. Maybe God? But there was only a pleasant, happy,  all-aloneness everywhere.

Suddenly, the birds went quiet, and there was a tap, tap, tap, like a conductor's baton on a podium. Then, we felt a rushing, pelvis-down-through-your-feet sensation, like when an elevator goes up too quickly. Dog stood bold and four-square, his ears going back against his head, while I wobbled slightly on my own two, thin pegs. The soft, leaf-strewn floor seemed to remain immobile beneath our feet, but we saw that the tops of the trees were passing slowly by the windows, and dropping away from view. The wind was whistling through the tiny cracks in the walls, and we heard the dry, bony racket of thousands of tiny wings flapping for all they were worth.

Soon, there was nothing but sky. The fairy castle was floating now, and the birds had gone back to their previous conversations. When you're actually inside the sky, it doesn't look blue at all, you know:  it just looks as clear and fresh as cold glass of water.

Dog and I no longer need to go to market. We have a new direction. The walk we were on is over.  A new journey has begun. 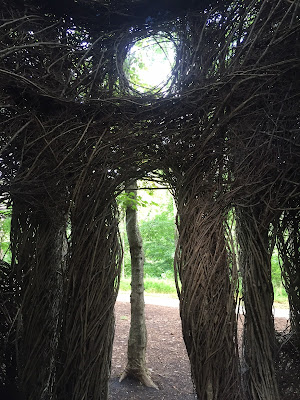 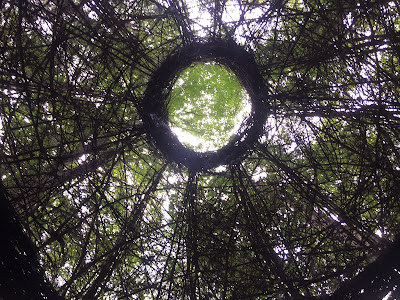