Help! (or, How The City Kept Me Skinny) 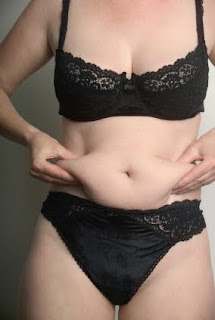 When I was younger, so much younger than today,
I never needed anybody's help in any way.
But now these days are gone, I'm not so self assured,
Now I find I've changed my mind and opened up the doors.
Opened up the refrigerator door, more like it! My life in the country is comfortable. So comfortable. Perhaps too comfortable? This week Exile went to the doctor, a new one only a short drive from our little stone house above the creek in Tiny Town. I found out that I have higher than normal cholesterol and I need to lose weight. Bummer.

I was pleased with myself on a sunny morning scooting along in my suburban car to the nearby doctor's office, presenting my shiny newlywed Cadillac Insurance Policy card to the receptionist, and getting all my tests, prods and pokes done before 9. I was less pleased with myself when yesterday I got the message on my cell phone telling me that my cholesterol - "*BAD* cholesterol" she said, audibly shaking her finger at it - was high. "You need to go on a low fat diet," she remarked seriously, and then suddenly perky, chirped "Good luck!" and rang off. Good luck. Indeed, good luck. Perhaps just a bit too much good luck?


I have spent my life either underweight or just right. I have always taken a quiet pride in my low blood pressure and excellent blood chemistry. I was the quietly despised one you knew in high school and college who could eat anything and get away with it. Of course, in those days I also yearned for a bit of body fat in very specific, womanly places, and I was afraid I did not have enough of it. But those fears aside, I could EAT and I did. I see in photos from that period how thin I was, how slightly downcast-looking; a bowed young plant, too pale green as if lacking in adequate sunlight. When I was not long out of college, MUE (Mother of Urban Exile) gave me "A Half Day of Beauty " at Elizabeth Arden in New York City for my birthday. The well-muscled Swedish masseuse who said her name was Helga and had blonde braids wrapped around her head like a crown, kept telling me to relax my belly muscles as she pounded away at my front. And then she realized that they were just naturally that thrillingly drum-tight and rock hard. Ah.

These days are gone.
It's not as if Exile has been utterly unaware that things were getting, shall we say, a bit tight in the inseam? I have taken repeated, if short-lived, stabs at cutting out the extras and getting on the old gym horse. But physical activity for its own sake has never been my habit. The family still jokes about my single-handed revival of the archery team in high school and the odd group of misfits who joined me out there behind the gym getting their ya-ya's out by repeatedly assasinating a straw target, perhaps imagining it to be the face of their adolescent sorrows. It felt so much better to be shooting a real weapon than it did to get clocked in the shins by a hockey jock! I wanted to flow, not run with sweat. But still, I was thin.

I moved to New Haven, and college was a wash-out athletically for me. Old Eli did not have a physical culture requirement, thank Heavens. So I remained in the library and off-campus among the musicians, writers, outlaws, stoners and fringe elements. I don't think I attended even one football game at the Yale Bowl, not even one. I was romantically involved with boy-men whose main characteristics (besides having adequate smarts and/or money to be at Yale in the first place) were a passion for guitars, sex, marijuana, and being very adept at passing academic courses without apparently ever picking up a book. My lungs suffered in this period. And I stayed thin.

Help, I need somebody,
Help, not just anybody,
Help, you know I need someone, help.
I launched into post-College life armed with Wealthy Boyfriend (WB), his emotionally scary family, and a job at a major media company. Exile began to notice there was trouble in her ivy-covered paradise: WB's obsession with weed, his Fender electric guitar and his subsumed anger at his mother caused problems in our relationship. Meanwhile Exile was anxious and unhappy because WB's family used their connections to get me the job and because I was living in their carriage house in Westchester rent-free and driving theirVolkswagen to the suburban train station every morning, and because I could not figure her way out of this horrifically dependent situation. WB slept in every morning while I sallied off to my New York City job wearing uncomfortable linen suits and high-heeled pumps. WB did not have a job -- besides being WB. And the green corduroy blanket that covered us at night smelled of a heady perfume of body and bong. Exile was wracked by worry in this period and I became, if possible, even a bit thinner.

Help!
WB abandoned me by moving quietly to California and simply never returning. I discovered that I was living completely alone rent-free in someone else's estate house in Westchester and, after the fashion of only the very rich, nobody said anything or even suggested that I move out. But a few months later I moved permanently to New York City, found myself a sublet on the Upper West Side (with a two-octave, out-of-tune antique upright piano, no less) and thus began my New York City period. The phone went silent. And alone in my flat, I ate spaghetti and scallions with garlic most nights, hardly drank at all, stopped smoking weed and started writing. I joined a gym. I was still thin but a bit worn out.

Now I find I’ve changed my mind and opened up the doors.
There used to be a weight gym called Women's Health and Fitness near the major media conglomerate where I worked, not far from Times Square and the Pink Pussy Cat. It seemed to me that the trainers were all awesomely well-muscled lesbians with Brazilian waxes, sculptural hair cuts, and unshakeable sang froid. I aspired to their form. I began to go there every day after work, crunching and moving and tightening my body, and I developed some serious muscle on my thin frame. I began to cultivate a more positive world view and I felt as if I were arming myself, for what war I have no idea. I knew that this new, sculpted me wasn't any more really Me than the bent reed Me with the slight cough, but I liked the sculpted Me better. I was incarnating, thin and tough.

Help me if you can, I’m feeling down
And I do appreciate you being round.
Help me, get my feet back on the ground,
Won’t you please, please help me.
Yes, New York City kept me lean. Overwork, lack of money, a challenging public transportation system, and generalized anxiety kept me on the thin side and on the down-low with the old cholesterol. I didn't have enough money to build up any plaque in my arteries anyway. Long after I quit the major media company and my membership at the Lesbian Power Gym had lapsed, and after Mountain Sea and I went touring in Europe for several years playing music and collecting Euros in a hat from our German fans, I was still thin. Humping from city to city in Europe with my suitcase, a guitar on my back and lugging an amplifier on a rolling cart kept the pounds off and my muscles stretchy and tough. I ate fresh herring and fresh juices several times a week (that's fast food in German train stations), sprouted grains, dried fruit and yogurt and doses of thick European espresso. And when I came back to good old New York City after three years, I was tough, strong – and thin.

That was three years ago before I decided to find a mate. I found FF and we fell in love. And that's when I started the slow unsticking from New York City, the careful move to the countryside of Tiny Town, and now – though Exile's apartment is still not sold as of this writing - I have moved to the country. For the first time in my life, I felt the pounds going on, felt the pants a bit uncomfortable. But when I asked FF about it he didn't seem to mind or notice at all. And when I whined about my weight gain, MUE said, "Don't worry so much! It's because you are finally *happy*."

But my doctor cares. And I care. A lot. If life has become good for me, it has also become a bit myopic and less challenging. I no longer have broken escalators that I must mount or remain trapped in the subway, no longer do I have a fourth floor walkup to live in and miles of pavement to cover every day. I no longer have stick then New York model types around to suggest the way of lesser flesh, nor my chronically overweight black and latino neighbors in Harlem to remind me of the dangers of Doritos. I have only this happiness of mine and a fair dose of prosperity. Can I get my body back in the midst of all this fresh air and plenty?

Perhaps if my gym had an inner city obstacles course, complete with runs to the subway, tenement walk ups and a subway to stand on all the way home...? Or? Maybe I'll just have to learn to push away from the table.
Posted by Dorothy Potter Snyder at Wednesday, November 17, 2010

I had a major weight gain about 18 years ago in response to a job going very seriously wrong. I was a secretary to a man who was manic-depressive (which I didn't know when I had started working for him two years earlier), and he hit a rough patch, took some sick time, and got in the habit of calling me and telling me that I was a horrible person and his problems were all my fault. My response was to consume bags of candy.

It took me a couple of years to get out of that job; unfortunately, the habit of eating as a coping mechanism has continued. The building in which I work has been undergoing a "reorganization" since the spring - one of the reasons I started my blog was to force myself to focus on stuff beyond the job. When I showed up for my annual physical a couple of weeks ago, I told the nurse that I was simply not getting on the scale. I told the doctor what was going on at my job, and that Starbucks was my coping mechanism. Wise woman she is, she said, "Good for you for figuring out how to manage."

None of us get out of this life alive, and I refuse to worry overmuch about the details. On the other hand, I do need to juice up the step count on the pedometer today, so it's time for me to get off the computer. Gotta walk. Get sunshine and fresh air!

If your FF really is the wonderful man you've portrayed, at some point, he'll say, "I like having more of you to love" and mean it.

I'm sure you can find a nice fitness center in your area where they can assist you in reclaiming your health.