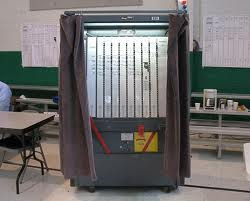 There was a hard frost on the windshield on election day 2010. It was 8 AM when headed out on the old Southern Road. The median was bristling with political signs, and when I arrived at the polls, a Sarah Palin lookalike on the left side of the main entrance of the Volunteer Fire House thrust a pink sample Republican ballot at me. To the right, a mousy woman with a receding chin clutched the yellow Democratic ballots to her chest as if she thought someone might steal them from her.
I was shocked to see such partisan behavior right at the door of the polls. In New York, the law says 250 feet away from the door of the polls, but here in Pennsylvania there they were, just 10 feet away. 10 feet. Like so close I could smell their hairspray, you know? I had the sinking feeling of being on the losing side already. I snarled at the Palin lookalike when she thrust her bit of paper into my hands. "I'd rather shoot off both my knees than vote Republican," I said with what I hoped was quiet menace. She didn't blink. Neither did I. She withdrew the ballot.
Inside, my name was quickly found on the rolls by the powder-white 2.0 versions of the elderly black ladies who have found my name on the rolls every year in Harlem for the past 28 years. Those elderly black ladies in Harlem are so good at their electoral jobs that sometimes they find my name on those rolls as many as three times! Now that takes talent. The machines are the old kind made of the same kind of gunmetal gray steel that armors the Intrepid in the New York Harbor. The red rubber handle that you pull is industrial strength. Oh, dirty old New York! Oh home of Charlie Rangel! But in Tiny Town I was found neatly registered only once, and I was led to the shiny new touch-screen voting machine which gave me less privacy than a public phone booth and less feeling of security than a parachute packed by Osama Bin Laden. I voted straight Democratic ticket. I strode back to my car. I was energized. Which is another word for really pissed off.

I know that voting Democratic in Tiny Town is about as effective as peeing down a well. But I have fantasies of Change. Yes, I do. I wondered idly what kind of candidate I would make? I'd never survive the beasts in New York City, but in Tiny Town....?

I am shocked by my own fantasy of taking on Stag County politics. After all, in a quarter century's time it had never occurred to me, even in fantasies, to enter political life. I was in New York and it was always clear to me that the New York political beast was way too ferocious for me. So why now? Could I really feel imagine myself becoming a bigger fish in this little pond? Has righteous indignation taken hold of me? I've thought a lot about what's going on in my corner of this nation, I have pondered campaign reform, I could fix some things. I have ideas.
Will Urban Exile don her form-fitting turquoise and orange super hero costume and dive into the blood red fray? If not me, who? If not now, when? If not here, where?
I am delirious.
Posted by Dorothy Potter Snyder at Tuesday, November 02, 2010