The end, in translation 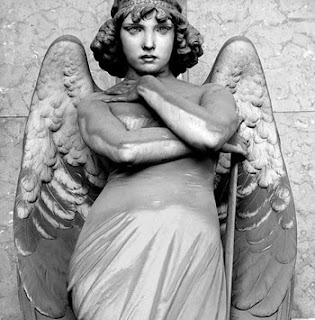 Two days ago, I was called to interpret at a law office in Mercer County and went to the meeting with no idea about the topic except that it did have something to do with a certain Ecuadorian man whose divorce documents I had translated only a few weeks before.

It turns out that the Ecuadorian man had done something bad, really bad, to a woman and now she was dead. The dead woman's father and sister, neither of whom spoke English, entered the lawyer's book-lined conference room looking spectacularly uncomfortable and out of place: In Spanish, I asked them to be seated.

The father was an indigenous-looking man also from Ecuador: short, strong and impressively built despite his years, he had no expression at all. The sister of the dead woman was also diminutive, but softer and somewhat lighter-skinned than her father. She looked like one of the pensive stone angels in the cemetery of La Recoleta in Buenos Aires, and on her skin were none of the marks of hard labor and suffering that criss-crossed every inch of the older man's face and hands.

The lawyer proceeded to explain that we were here to sign papers to finish the case against the person who had killed their brother and son in that terrible accident seven years before. The lawyer shook his head slowly, heaving an obligatory sigh. After costs, lawyer's percentage and everything else, they were to get 80 thousand dollars. They were to speak about the case to no one and this was to be the end of it, the lawyer said. I translated all of this into Spanish. We have worked on this case together for seven years, he said, and now I will probably never see you again. I translated this too, and there was a silence. The man and woman had no reaction whatsoever.

I had to explain in Spanish to the family of the dead woman that there would be estate taxes to pay, and that there might be another bill from the lawyers in Delaware also. They nodded, careful of their reactions, guarded. I explained what would happen next, how the money would be distributed, and how their amount would be disbursed to them. The lawyer, through me, asked the father to sign several papers as administrator of his daughter's assets and estate, bienes y sucesiones, and he did, with the elegance and flourish of the simple man who aspired to a certain cultivation. I commented on the beauty of his signature. At last, he smiled.

The lawyer repeated urgently: Tell him this is the end of the case, tell him it is over. Tell him I will send him a check within the next couple of weeks. I translated this. The man nodded. His daughter nodded. They understood.  It was over and this was it, here and now. Do they understand? asked the lawyer. Do they? Yes they do, I responded. The old man and his daughter were not flustered in the least, not jubilant, not sad, not anything at all.

When the papers were collected and the family had gone, I walked out the door to my car. The lawyer and his assistant thanked me, and I said no problem, I'll send you an invoice.

A woman killed, a document signed, money changing hands. There could there be no sense of real closure or victory in that quiet, book-lined room where the sound of shuffling papers was the only punctuation to the end of a long legal struggle to obtain a sort of justice for the sort of people who never get justice, no matter how many papers are signed. I wondered if 80 thousand dollars seemed like a lot to the Ecuadorian family. I wondered what they would do with the money. I wondered if they might send a child to college with it, in which case this would not be an end but perhaps a beginning.

I waved goodbye to the lawyer as he slid into his BMW. And I drove home alone, sobered and emptied.

I'm feeling weepy as I read this. Subtract estate taxes and another lawyer's bill, and these people are being told that their dead girl is worth less than $50,000 and seven years of struggle; and the lawyer telling them this slides into his BMW at the end. What a terrible tragedy.

Oh, if we could only weave those tears into a cloth, and of it make a flag to fly for every immigrant whose dignity got left behind. Thank you for visiting, Liz. (BTW, I love Tenured Radical's work, too!)