The Perils of Metamorphosis 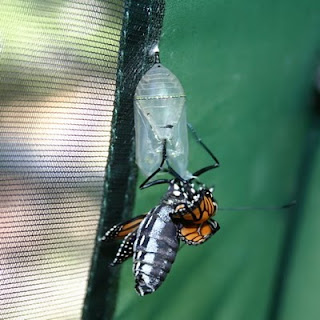 UE tried to Google her own blog this morning. A bit premature it is, considering that I have only three entries and no followers. That said, I was still disappointed when I couldn't find myself. (New moment of existential angst: If I google my blog and it isn't there, do I really exist?).

I did, however, find a handful of blogs and online diaries with the words "Breaking up with New York" in them (why, oh, why did I think this was an inventive title?), usually somewhere in a post and not the actual title of the blog. From the style and tone of the texts, it sounds like all these bloggers are all women and they also tend to call NYC "he". I never felt NYC as a "he", despite Alex Rodriguez and the Yankees, the phallic skyscrapers, the roaring subway and all the other testosterone-charged aspects of the place. I have always felt NYC as a "she", and still I am breaking up with her, though I am not the lesbian in the family.

The only thing I can point to that makes this blog different from these other blog/diaries is that the whole point of this blog is leaving New York City after 28 years, the feelings that dredges up in me, and how this move seems to fit into the trends of modern American life. It's not just an episode in a larger text leading to another point: It is the point.

As I write this, now safely ensconced in the rafters of my little studio in Tiny Town on a bright Thursday morning, there's a buzzing going on. No, I mean a real buzzing, not just something in my head or on Page 6. I have tracked it down and it is definitely coming from the ceiling rafters. Furthermore, if I listen carefully, I can tell it is live buzzing, that is the sound of an insect, the kind of buzz followed by dry little pings of wings on hard surfaces, like flies stuck between the window and the screen. It's probably another stink beetle that's been born inside the wall trying to find its way to freedom or, put less subjectively, to the outer surface of the 200-year-old beam in which it was hatched by the hot, incubating summer air. For this beetle, freedom will be just another word for getting smashed in a paper towel and flushed. That said, I am amazed at the get up and go these critters show from the moment they are born! How do they know that the cramped space they are in is not where they are supposed to be? Where do they get that energy to struggle like Hell to get out?

Butterflies are in metamorphosis, inside the cocoon changing from caterpillar to butterfly, for anywhere from two weeks to even a couple of years. When they finally emerge from their cramped pods they can easily die, either because they are eaten by predators while still weak, or because they don't fully escape from the chrysalis and the acid substance they emit to penetrate the walls of the chrysalis starts to burn and deform their vulnerable, new wings.

With no visible signs to signal the emergence of the butterfly from its chrysalis, the chrysalis suddenly cracks open and out comes the monarch butterfly. Its wings are tiny, crumpled, and wet. The butterfly clings to its empty chrysalis shell as hemolymph, the blood-like substance of insects, is pumped through its body. As the hemolymph fills the monarch's body and wings, they enlarge. Right now, this monarch is extremely vulnerable to predators because it is not yet able to fly.
Buzz, buzz, buzz. Ping, ping. Tiny, crumpled and wet.

It took me 28 years, not 14 days, to achieve this metamorphosis. And as I escape the chrysalis I feel the possibility that I might not make it. Every time I go into the city now, I feel a sense of impending doom. Will my own poisons destroy my wings? Will some predator get me just as I am about to fly?

It is summer, and UE's student population has fallen off horribly. I begin to worry about money, even though FF tells me I don't have to. After a lot of years on my own, worry about money is just something I do by reflex: I am not really convinced that FF has my back primarily because my longer, harder experience is that no one, ever, has had my back when it came to paying the bills.

So I don't know what to do with myself. Go to yoga class. Write this blog. Take on a legal interpreting gig and hope I know enough legal terms to explain to the poor Peruvian guy trying to prove he got divorced in Peru what his lawyer is doing for him. Weed the garden. Feel rather out of character in this role of suburban almost-wife. Perhaps I could practice guitar and get back to being the songwriter I was before all of this happened? Perhaps.

FF and I went into the city on Sunday and I placed things in boxes, mostly books and blankets which I tried to layer up so that FF did not break himself walking down the four flights with ten ton boxes of books. We rolled up the carpet like a Yankee Doodle, taped it, and threw it last into his SUV on top of all the other things. I decided to travel back to Tiny Town with him instead of staying in the city, and the spoken reason was that I didn't want him unloading all my stuff alone into the storage space. But the unspoken reason was that I was suddenly terrified of being left alone in my now much emptier apartment.

I slept here in Tiny Town Sunday night, and then on Monday drove myself to the station and took the train back into the city, feeling rather like a child not wanting to face cleaning her room. I had no students on Monday, all gone on vacation, so I humped back up to Harlem and opened the door. The sunlight poured in through the beautiful big, living room window and it showed all the mounds of dust that had been lurking beneath the carpet. The air was stuffy and still. It was breathlessly quiet, waiting. The bookshelves in my study showed only dust and bits and pieces that were too unwanted or too small to pack in cardboard boxes: an analog guitar tuner, some old backup CDs in plastic cases, a seed pod, a feather.

What do I do with this stuff? "Throw it out!", you scream. No, but I am obsessed. I want it all placed somewhere. I want all of these things placed in good hands, hands that need them. Some things will escape New York with me, others must stay behind and await the Apocalypse with their new owners, fresh-faced middle school teachers and dewy Master's candidates at Columbia. I go on to Craigslist and continue trying to sell things: The old fax machine, $35; the bootleg DVDs someone gave me when I was sick; the blue file cabinet (sold). I post things in the "Free" column: file folders, stacks of paper, envelopes, a puzzle. I feel like I am begging: Please take my stuff, please take care of it, I can't haul it where I am going.

Last night, UE's Best Friend (BF) surprised her by commenting that he had noticed how carefully and cleanly she always made such transitions. BF now lives far away in AZ, having escaped in body from New York though his spirit still figures on coming back. I wish I could sell my cocoon, er, apartment to BF, but he and his girlfriend don't have enough money to do it and she's not too excited about living in Harlem being more of a Brooklyn gal. But that would be the ultimate for me, really: To leave the apartment safely in the hands of a friend.

And where am I going? Like the stink beetle struggling in my wall, I have no idea really. This beautiful, rented stone house in Tiny Town is just a stop on the way, and I am conscious that everything I move now will have to be moved again, so I am being harsh with the cut. But like the beetle, I want out. And like the beetle, I am batting my wings, ping ping ping, against the hard surfaces of my material life, inspired by the clear, interior mandate that I must get out of New York City as soon as possible.

Wait. The buzzing has stopped for a moment. I stop typing and listen, breathless. The beetle is resting between efforts to escape.

I commented on this post a long time ago. Where is that comment now? I dunno but I think I must have made some error at that point in my signing up for posting rights.

I love this person in change and so aware of it and the analogous changes happening around and I love your writing. Keep it up. I hope this comment sticks

You know, the comment section has been a bit flimsy. They seem to disappear randomly. I am sure they are all still there somewhere. Thanks for caring enough to post again. See you in November!