No Time to Celebrate 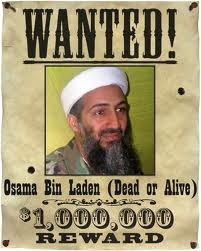 On this gray day when all the media is awash with news of the assassination of 9/11 architect Osama bin Laden by US Navy Seal Team 6, I am solemn.
I was a New Yorker on Chambers Street the day the Towers crumbled to the ground, but I do not join in these celebrations. I broke up with New York City in part because of an ever-increasing sense of unease at the security risk of living in a densely populated urban area, but I do not join in these celebrations.
I find unseemly and disturbing the jubilation in the streets, the flag waving and the vulgar language on the front pages of certain New York newspapers. I wince as the families of the victims of 9/11 are trotted out (again) on the major networks to admit morosely that justice has been done but to also reassure all of us that their wounds will never, ever heal. I am also wondering, as does Chauncey Devega of the intelligent blog We Are Respectable Negroes how right wing strategists are going to find a way to deny credit to President Obama for this momentous event.
Joy over the death of anyone is a bitter joy indeed. The solemn face of our President as he reported the death of Bin Laden last night might have been a guide for us as a nation, if we respected our elected leaders enough to model ourselves after them. As long as we maintain our passion for revenge, our delight in the suffering and death of people of whom we disapprove, our determination to hang on to our personal wounds as if they were badges of honor, and as long as we continue to rapture in violence and death, we invite Death and War into our homes and hearts.
Inevitably, the Fear Machine is already cranking up in the wake of this "victory". Already the commentators are warning us that alert levels will be higher, and that once again we should fear what comes next. The cycle of Death and Fear, uninterrupted by wiser thoughts and higher consciousness, is never ending. The human ego, which wants everything for Self and has never learned to share, continues to eat the Death Pill despite our professions of Christian charity and belief in eternal life. We remain prideful of our supposed liberty and free will as Americans while still living as unconscious prisoners inside this maximum security facility of Fear and Separateness that we have built for ourselves with our grim celebration of Death and our belief in the rightness and inevitability of Violence Ever After.
It is not just history itself but how we react to it that counts. Are we only able to mourn for our own? Must we celebrate the demise of our enemies? Can you imagine an America filled with generous people, candles lit, praying for the souls of the dead in this battle and remembering with love those lost in the attacks of 9/11? Can you imagine a silence falling over New York City, a thoughtful silence, in all American cities and towns far and wide as we collectively prayed for Peace and the end to assassinations and war? Can you imagine an American public and media awake to their own fundamental role in and individual responsibility for the creation of a world free of hate?
I can hear you scoffing. Don't scoff. That is what the Dark One wishes you to do so that he can keep you incarcerated in the prison you currently inhabit. Do I believe in a Devil, you ask? No, not "just so". But I know that if you want peace, you have to Be Peace, Breathe Peace, Live Peace in every act, every day, and I am certain that the frenzied chest-pounding over the death of Bin Laden is not that.
Is the death of Osama bin Laden a victory? Certainly it is an important victory for the US Armed Forces and the President: A mass murderer has been run to ground. But for global humanity it is a complete failure that we continue to settle our differences this way.
Posted by Dorothy Potter Snyder at Monday, May 02, 2011

I have never commented here before, but I had to this time in order to express how grateful I am to you for this post. I could not agree with you more.

When I write from the heart, it seems other hearts respond. Thank you for your comment and don't be a stranger.