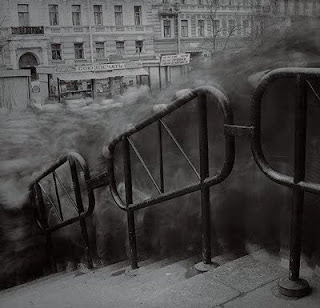 I found you on the WARN blog, you've got a nice voice, good luck with it. The idea of leaving NYC has resonance for me, I was born there (Queens) and lived there until I was twenty-seven, when my wife and I moved our little family to L.A. (Going from the frying pan to another frying pan with slightly better weather.)

My biggest problem was adjusting my speech so that people in America in general could understand my English.

Anyway, good luck with the move, and don't let all of that fresh air and quiet get you down.

Thank you so much fred, for your kind words and for connecting with the specificity of this move from NYC which is like no other. I will be careful to watch the doses of peace and quiet in the new life, to begin just one week from today!

My voice here was a little ironic, I suppose. I think people like me best when I am sensitive and not ironic, but each voice has its usefulness.

What is the WARN blog? would you kindly post a link?

Sorry, WARN is "insider" shorthand for the We Are Respectable Negroes blog.

Leaving NY really is different, since you are leaving so very, very much behind. Non-New Yorkers have little idea of the vast, daily availability of entertainment and educational opportunities, many of which are free or dirt cheap.

But we had fun with the move. I remember asking my son, after his first week in a Santa Monica kindergarten, how the kids were treating him. He said they were fine, but "they talk funny, they say 'tahk,' and 'dahg,' and 'chahklet.'

Adoro WARN. I really love it.There are simple and smart observations to be found there that are utterly unique.

Regarding leaving much behind....Yes, it is true. Though I would say that ultimately it is the human factor that is hardest to leave, for in that swirl of energy and concrete that is New York I found some real human beings that I loved, or they found me, and it is thanks to Skype that I can still be part of their lives and they of mine. It will be different though. And there is nothing like sitting in a living room on Fifth Avenue with a panoramic view of Central Park when it is just fresh-covered with snow.

Thanks for reading, Fred. - D.