The Train To Nowhere? Or Train from Nowhere? 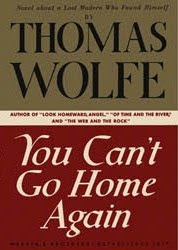 Urban Exile awoke a few mornings ago in the dawn's early light making desperate croaking sounds. In her dream, she was saying "No, no, no! don't leave me here!"

FF and I are vacationing at a fabulous little bed and breakfast called the Princess Anne in Asheville, NC. We have a nifty little suite in this Victorian building that was once owned by Johnny Mercer. We eat apple smoked bacon and eggs in the morning to the tune of "Moon River" and everybody's smiling at us. We've got a cute kitchenette in our suite, a sitting room and a lovely bedroom, all tricked out with ceiling fans, AC and lots of comfy pillows. We are vacationing, but we are also looking for a place to live together when we get married.

Yes, FF and I are pondering whether living here in Asheville might be a good idea.This Saturday is an open house for the New York apartment and Exile's real estate agent, Kalim, sent a brief note indicating there was "interest". As soon as the Exile sells, there will be a little pile of money that will be added to FF's little pile and we will buy a house to live in for the rest of our days. Certainly there is great beauty here in the Smokey Mountains: My dear friend from college days Emily Jane is here, and you can really get a lot of house for the money. Furthermore, Exile has had log cabin wet dreams since she was a little Exile, and there are a lot of those in them thar hills. And did I mention apple smoked bacon?

So this vacation is also a kind of hunting expedition. We have an agent here too, an ex-New Yorker who attended the girls boarding school right across the street from the girls school I attended, who speaks our lingo and knows the area. She drives like a demon, was recommended by Emily Jane, and she's been combing these Smokey Mountains with preternatural energy for a suitable house for us. Everyone is sanguine about this project, including me. The area is lousy with little colleges and water falls. And it has a young, organic, sustainable bounciness to it while still conserving a certain savory, gracious, slightly worn at the corners vibe that suits me to a tee.

So why, in this idyllic setting with so many happy possibilities unfolding before me, why am I waking up from a nightmare gasping and screaming?

Could it be the apple smoked bacon?

In my dream, I was on a train, an old commuter train, on which were passengers who seemed to have been there for a very long time. So long had they been on this train, indeed, that their possessions were scattered about, their suitcases open, as if all tension about the moment of arrival and descent to the platform had disappeared in favor of a resigned knowledge that they would never, ever get off that train. I began to argue with these passengers, trying to convince them that getting off the train at some point was absolutely essential. They listened politely but it was evident that my words meant nothing to them. Somehow they were in possession of a secret knowledge or resistance that made my desire to arrive somewhere, to get off the train, utterly nugatory.

At last, the train pulled into a station. I raced to the space between cars, and I saw everything suddenly in full color: The bright yellow diamond-plate treads of the train steps; the red brick platform coming into view; The old fashioned black iron street lamp illuminating the bricks; the brown wood and warm copper fittings of a luggage cart waiting nearby, empty. I did not know what stop it was, but it was a stop, a real stop, a good stop, and I called to the people on the train to get off the train with me. Quickly, quickly! I called. Before it's too late!

They sat still and staring surrounded by their piled up fragments of luggage and, when I saw that they would not come, I leapt alone from the train onto the platform, accepting the fact that I was leaving my own luggage behind. But when I landed on what I thought was the station platform, the landscape changed, horribly: For all at once I saw that there was nothing there but a flat, beige, featureless plain that stretched out in every direction eternally. I saw that there was no there there, and I began to scream as the train pulled out, leaving me behind. Nowhere.

This screaming is where we find ourselves as I woke FF at around 5:30 in the morning and he kindly  pulled me close and said "there, there" and put me back to sleep wrapped in a bear hug.

What in heck is this all about? What is my subconscious trying to tell me?

As FF and I look for the place that we are going to live together, the fundamental question we ask of all places is "Why here?" And then we wait quietly for an answer. We know that granite countertops, stall showers and crown moldings can be found in their hundreds of thousands everywhere. The primary question is whether or not the land itself has a purpose for us and calls us to come. So, as we weave around these Smokey mountains and valleys, we ask the question: Why here? Why here, and not somewhere else?

This is the first time I have searched for a home based entirely on a sense of place rather than some other professional or personal exigency. This kind of search is hard for real estate agents (and our families) to understand, because it is so internally driven and apparently impractical. We must accept that our answer to the question "why here" may not ultimately make sense to anyone but ourselves.

It is hard move away from the Northeast where I have spent my whole life. Sister of Urban Exile (SUE) and Mother of Urban Exile (MUE) live there,  and MUE is getting on in years now. All of FF's siblings and his parents are deep in Central PA, and his parents are of course also getting on, too. Nobody wants us to move farther away, and we fear it will be hard to help them understand that we are not moving away from them: We are moving to something else. FF and I are moving toward something that we have been piecing together from the sun-cat scraps of our oldest dreams, our shared vision, and the numinous space that has filled the air around us ever since we fell in love.

FF, who is not apt to express preferences of any kind, did quietly say that once in his life he'd like to live somewhere other than Pennsylvania or New Jersey. I've had a lifelong jones to live in a cabin in the mountains and to have a little land to care for. Both of us would like to be a little warmer for more of the year. And both of us want to live somewhere that inspires us to do our best work.

So here, in a Victorian house a few blocks from where Thomas Wolfe wrote You Can't Go Home Again and Look Homeward, Angel, FF and I ponder where our home might be. Does this place feel like it might be it? Or could we take the leap, despite the warnings of the other "passengers", only to find ourselves in a tremendous, scary Nowhere?

All of us who live in New York have imbued our urban sufferings with the tangy perfume of magnificent arrogance. Crowded, dirty, stressful, expensive place that it may be, New York is the Center of the World, is it not? And we who live there are supposed to be, by association, the center of humanity itself. We resent with a white fury the idea that better ideas, better clothes, better views, better art or better anything might exist elsewhere. And we grasp that belief tightly because if we did not, who could make an argument for putting up with the daily insults that New York dishes out? But there is a qualitative difference between pride and arrogance, between loving an illusion and being downright deluded.

Still, the New York illusion has a piece of me. I am afraid to loosen my toes from the edge of the diving board and fling myself into empty space. I am afraid to sell my own miniscule speck of the Center of the World and trade it in for...what? I have been so loyal to New York. I have given her my heart. But has she given me hers?

Thomas Wolfe, who wrote "You Can't Go Home Again" four blocks from where I am sitting now, wrote that "One belongs to New York instantly, one belongs to it as much in five minutes as in five years." Yep, she's an easy girl, New York. Accepts all comers. And when I'm gone, she'll take on another without missing a beat. So why do I care after all? Who can lament the loss of such a friend? 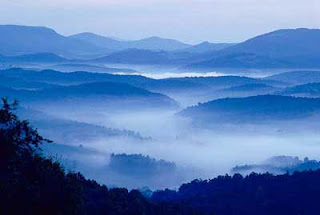 And what about this place? Thomas W. thought rather more kindly of Asheville and these great Smokey mountains around it. This old red clay Cherokee land may grow to love you truly if you stay a while, but it's going to take years of your life. And don't you imagine that eating shrimp, grits and apple smoked bacon for breakfast and saying "Hey" instead of "Hello" will get her to love you any faster! No, ma'am, the south will make a slow approach. But I've a sense that maybe, just maybe,  once she gets to know me, however many years that takes, she'll be just a little sorry when I go.
Posted by Dorothy Potter Snyder at Thursday, July 29, 2010

I've been quietly reading this blog since I first had it pointed out to me a month or more ago. It's personally resonant, as I sometimes think of myself as an exile from a different big city (for the less interesting reason of professional exigency); more importantly, it's incisive and elegant. Anyway, the Asheville post led me to think, despite not knowing your taste in literature, that you might really enjoy reading Harriette Arnow's 1954 novel _The Dollmaker_. And even if you don't enjoy it, you can count on it to do everything in its power to validate your choice of mountains over city.