A violent act, or at least so it seemed to me when the owner of the house that abuts ours on this historic row of stone homes in Tiny Town cut down the old pyracantha that had graced our common garden wall. Our sturdy fire thorn, with its big pomes that were firm and green and ready to become a rich orange by fall when the birds abandon our feeder for its nutritious berries, is gone. 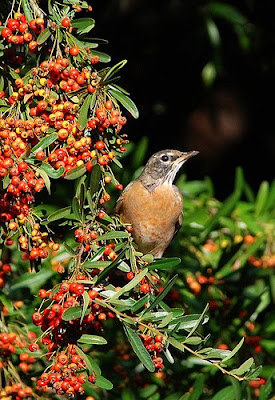 I came home from teaching in the city and found it cut to the root of its thick trunk, its healthy branches stacked up like garbage in back of the house. My tibetan chime, which had hung from one of the lower branches, was also gone and nowhere to be found. My nemesis, Scrappers the Squirrel (Knight of the Plumey Tail) stood in protest on the now ragged ivy growth on the wall, chattering his anger. The birds flew about, confused.

Firethorn is known as a pleasant place for birds who nest in its protective, sturdy branches and feed off its nutritious berries. Firethorn is used as a protective barrier because, despite its beauty, it is sturdy and its 3/4" long thorns are sharp as sewing needles. For Scrappers the problem is that the branch he had used to leap onto our bird feeder is gone, though I am sure he will figure out how to redress this temporary setback. I am not sure if I will be as resilient.

We had a Firethorn when I was child, and it splayed itself against the beautiful quartz-filled fieldstone walls of our family home. Its strength, its color, and its annual cycle of growth and color display was a seasonal marker for me. When FF and I came to visit the house in Tiny Town for the first time, I saw the Firethorn, I smelled the sweet, musty odor of boxwoods like Grandmama had grown in her Idaho garden and I was charmed. These plants, so nostalgic for me, filled me with a peace and a sense of Home that was immediate and irresistible. We saw the house on a Saturday and we agreed to rent it on Sunday.

The woman who cut down the Firethorn owns at least two of the seven houses on the row and at one time she owned three of them with her late husband. She is not a bad sort in general terms, just a widow with too many properties to manage left to her by her spouse. She told me she just wants to sell some of the houses, and not have to deal anymore with the headaches entailed by managing rentals.  She is square-built and not tall, with a head of short, strong gray hair that gives her a tough, official look as if she might be a warden in a women's prison or a bailiff.

She is a different breed from me. She prefers neatness over beauty, quick cutting over careful pruning. She suffered not a qualm when she cut that huge healthy bush to a stump in the ground with the cold, chainsaw efficiency that is utterly foreign to my nature. She did not advise us she was going to do it either, perhaps because she does not live here and she has no sense of neighborliness with us. She is one of those territorial, legalistic types who would point out if questioned about it that the tree grew on Her Property, while ignoring the important truth that it shaded and graced ours as well.  In one fell swoop she changed my partial shade garden into a full sun garden, two months before my wedding and in a heat wave where the temperature has reached 103 degrees.

So my whole garden plan, based around hydrangeas, has been put in jeopardy. Every morning I stand there with a hose in my hand, watering the ground, forced to gaze upon the ragged hole in the ivy where the Firethorn used to be. It's a loss, a friend gone, and I am reminded that breaking up with New York City does not mean that I will be able to break up with loss or sorrow. There is no Pure Land, as the sutra says, except in my own heart.

So, as my dear little apartment goes on the block and I prepare for that farewell, I also say goodbye to the Firethorn. I keep thinking that this breaking up with New York is all about entering a phase of my life when I learn to say goodbye to people and things with grace. FF says that seeing each day as the First Day, with only the day's tasks ahead and no memories of the past, might be a way to approach such losses. He is, of course, right. Why hang on to something that saddens me when I cannot redress it but only mourn its passing?

I have a neighbor, a spicy slightly thorny woman who is perhaps 10 years my senior. She is a writer and a gardener and someone who you would never miss in a group of people because her words, bright gaze and smile are scissor sharp. I like Aden, and I go to her sometimes when I need a new thought about something, because her ideas are often precisely the ones I would never have, and that's why I like them. Let us just say that the brief verbal explosion I had on the patio when I discovered the chopped Firethorn had reached her ears, and a day later she came to offer some words of consolation.

They are hardly little beasties, those pyracantha! And yes, it will grow back but not in time to save your garden or comfort the birds this winter. Or you, now.

Thank you Belle. You are right in what you say. Happily FF devised a system of umbrellas stuck in the garden to shade the hydrangeas, so now they look like ladies at a tea party. Adversity's a mother, isn't it?