Two big moments happened in the life of the Exile this week: I changed my name officially and I registered to vote in Pennsylvania. In Pennsylvania! The land of my birth, the home of old money conservatives, cricket club blue bloods.  This place is nothing like the edgy Upper West Side Democratic hive of New York City where I've been a citizen for 28 years.  I imagine myself a radioactive seed secretly planting myself into local politics here in Stag County: First Tiny Town, then the Nation!

First, though, the name change.  My marriage to FF has caused a landslide of bureaucratic tasks which I labored to complete, and even then stopped halfway: These tasks principally concern my new last name, and admitting officially for the first time that I am no longer a resident of New York City.  Oh man, this is a lot of work, let me tell you! But that is apparently what falling in love costs these days: Lots and lots of paperwork, lots and lots of hours filling out forms. I want to be officially Mrs. FF, old fashioned girl that I am. 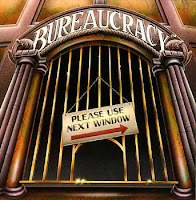 First I looked for help to organize this task online: There are various sites for brides (not grooms) selling packages for 29.99 to help one go through the process of changing all of these documents to reflect your new life. What the ads don't tell you are two important things: You can get all of these forms and instructions elsewhere for free; there will be more expense, lots more expense, depending on how far you want to take this new identity thing. FF could have taken my name, which we both rather like, but it would have been weird for his parents and, anyway, what's in a name? Exile was quite unfortunately given a 6 syllable hyphenated first name by her parents, and since I didn't want an un-euphonius 10 syllable name, I asked the woman at social security if I could just use the second half of my first name, that is, the one I have been using publicly all of my life. No, she said. You must go to the Courthouse in Doilyville, fill out the forms, pay 299 dollars (where do they come up with that price?), and then appear live in court to tell the judge in person that you want to make a civil name change. Uh, okay, I said. Never mind. So now I have a 10 syllable name, just because I do not want to completely amputate my maiden name which I've always liked just to reduce syllable count. My name is long as a train. So be it.

Next step, FF goes to the the old HR department at Yankee Doodle Bank where he works, and he signs me up to be part of his Cadillac medical and dental insurance plan,  the first decent plan I've had since 1989 when I quit my job at The Big Newsmagazine Corp. Whooeee! They also have my 10 syllable name on file.

The next step was to register with all ten syllables to vote in Tiny Town, Stag County, PA. But they let me put my name the way I wanted it, without the first three syllables! No proof of my identity was required, just a mailing address.

Then came changing the passport and driver's license. Exile opted out of this for not wanting to spend the money. It was going to cost serious dime to do it, and they're both good for another 8 to 12 years, for heaven's sake. And by the way, according to All Sources, I will not have a problem with immigration or the police if I don't change them. I know FF will worry about this: After all, if I am detained at Kennedy Airport returning from our romantic trip to Paris, will All Sources come to bail me out? Still, I am not taking on changing those documents right now.

The final step was to change my name on ALL of the credit cards, also not a required step but one I want to do because it is FREE, and it is fun to see my new 10 syllables strung across all my plastic. None of the credit card companies put up a fuss about the new name, either, and no proof of identity was required to borrow or owe money! Whee. As a matter of fact, I found out from the lady at the social security office that anyone can get a copy of my birth certificate from the authorities without proof of a right to possess this document. So I said I to her, sez I, gee whiz, sounds like that would be a great place for an evil-doer to start building a false identity, huh? The social security lady said "Hmph!" but did not otherwise comment. 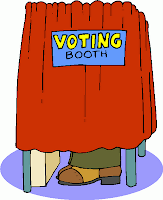 Now Exile's name change (all 10 syllables) is complete, I am fully insured and I am registered to vote in the Republican stronghold of Stag County. I no longer have any official contribution to make to the political life of New York City. Indeed, I am going incognito. The papers have been filed, the break-up is nearly complete. When I sell the apartment, we will be divorced, New York City and I.

The break-up with the political life of New York City is dramatic for me and provoking the usual psychic disturbance that every step of this slow separation has caused me. In the 28 years I lived there, even when I was touring for three years as a singer songwriter in Europe, I always voted. Always. I remember voting against George Bush from an Irish Pub in Bonn, Germany where I had carefully had my absentee ballot sent in advance.  Even then, looking at New York from across the ocean, I kept my hand in because my parents brought me up to take my responsibilities as a citizen seriously, and because as a New Yorker I felt my vote as powerful on a national scale. Now, New York politics will have to get along without me.

I don't know the political scene in Tiny Town or Stag County very well. I have a creeping sense that my vote here will be less important somehow,  lost in the less-populated, wealthier, more complacent atmosphere of this land of country squires and bridge club ladies. Somehow I feel like no one really cares what the people of Tiny Town do, think or vote for. Might I be experiencing the first inklings of the resentment that citizens of Tiny Towns all over the country feel? That feeling that nobody cares? Or am I just still suffering from the illusion that my vote in New York City was a lot more meaningful than it ever really was?

My New York City polling places were always edgy, mostly unwelcoming places, even before I moved to Harlem. They tended to be mildewy, none too clean public school cafeterias populated by weary, bag-eyed  poll workers who took names, assigned voting booths, and thanked me (with a deep sigh) for voting.  My last polling place was the basement of a low-income housing project in Harlem, a linoleum-floored mausoleum of indeterminate color which seemed more suited to housing cots for flood victims, or a feeding station for the homeless than the noble business of exercising one's franchise. Year after year I went and voted, and year after year returned to those unwelcoming places, always leaving with head held high and a sense that pursuing this adventure was important and meaningful. For three years, my name was on the rolls in triplicate, and it took three years of letters to the Board of Elections to get myself to be just one person on the rolls. Ah, good old, dirty old New York City!

But as I near the end of my relationship with New York City, what has really changed as the result of all of all my voting? Charlie Rangel is still a congressman despite all ethical arguments to the contrary. Columbia University is still taking over vast tracts of expensive real estate claiming eminent domain and getting away with it. Homelessness and poverty are still creeping up scarily. The price of a subway ride goes up every year, as does everyone's rent. The buildings at ground zero still aren't built 9 years later (the Empire State building was built in 1 year and five months). And the escalators still don't work. So what has all this voting in the Big Apple gotten me? Maybe we haven't seen a lot of progress, but as Blanche du Bois would remark, possibly my faithful appearance at the polls has helped in some small way to keep us from sliding back to the Stone Age.

With my new name, my new location and my new registration, I now have a chance to begin again. Maybe the center of the world is not the best place to make a difference anyway, all illusions to the contrary. Maybe, armed with the impressive club of my new 10 syllable name, I can sally forth and make my one vote count here in Tiny Town.

Or maybe I will find out that size really doesn't matter after all.
Posted by Dorothy Potter Snyder at Sunday, September 19, 2010

IN this election, I suspect your vote is far more useful in Pennsylvania -- if any of our votes are useful anywhere!

In my life, I have missed one general election (and perhaps a couple of school-board elections); I still regret that because of my mid-October move at 22 (on about two days' thinking from my brother offering his apartment to my landing there), I didn't get a chance to vote against Don Riegel - he two-timed his party, his wife, and the voters - in 1982. On the other hand, that summer I'd been able to vote for Zoltan Ferency for governor in the primary. Isn't that a marvelous name? ZOLtan FERency. When he ran for governor in 1964 against George Romney (father of Mitt), LBJ came through on a whistlestop tour and told voters in Michigan, "I hope you vote for my good friend, umm ZolTAN ferENcy." My mother loved telling that story.