Ah, sucking up free WiFi at Starbucks on a Wednesday morning! Waiting here for the 1 PM bus to Tiny Town, I take advantage of the moment and the caffeine buzz to write to you, dear Reader.
With my bad attitude as expressed in my last entry here, it should come as no surprise that when I arrived in New York City yesterday morning I was confronted by a series of dreadful moments. Yes, I take some responsibility for it, and I suspect that with my own dread and loathing I actually conjured these moments into being.

First Dreadful Moment: The Chinese girl in the "Quiet Car" on the NJ Transit 8:32 to Penn Station who talked the entire time on her cell phone, palidly and smilingly immune to all requests to desist. How can this be?!?!

Second Dreadful Moment: Immediately upon arrival at the station, there he was, The Massive Sweating Fat Man, looking much like the scary nurse-baby from Maurice Sendack's Higgledy Piggedy Pop who screamed "No Eat!".  He descended the wrong side of the stairway and (I kid you not) actively tried to block me like a defensive guard as I tried to ascend. He moved to the left when I did and to the right when I did, all the while grinning and looking me directly in the eyes. "Walk to the right", I muttered. "Who made THAT rule!" he bellowed, "YOU?"
Third Dreadful Moment: Getting off the A train in Harlem where, walking up the three flights of stairs to the surface I encountered various discouraging artifacts in this order: a poo-laden diaper on the stairs; a wild-eyed man approaching people for "fity-fi' cent t'git tuh Brooklyn"; and finally a raggedy man stinking up a cloud of funk while screaming curses at the ghosts of his id who apparently inhabited the darkened, closed token booth.
Yeah, I know. This kind of whining ain't the best propaganda to sell my apartment. It is however apparent that even if I take a karmic approach to it, these sort of incidents are more numerous in New York City than elsewhere. That is, while I know that the better frame of mind I'm in the better things seem to go, I do not believe that this sort of machine gun-like spray of ugly moments will be apt to occur in, say, Woodstock. Any Woodstock. Anywhere.
So, as I sit here in Starbucks drinking yet another completely unnecessary cup of coffee and about to make my weekly escape to Tiny Town, I decided to write down a few suggestions for you, New York City, a few ideas that might pretty you up a bit and minimize disturbing moments.  I have a sense that if I put it out there you may actually take my advice, like you did when I started talking up putting estimated train arrival times on the electronic message boards that were already installed on subway platforms like they've done in Europe for decades already.  My suggestions are simple ones, mostly using existing resources, mostly already done in other places, that would make you a better place to be. Take heed New York: Your future depends upon it.
Suggestion #1: In high-traffic areas, paint the word "DOWN" on the right hand side of staircases that go down, and "UP" on the right hand side of staircases going up.  Paint the "DO NOT ENTER" symbol on the sides where you should not walk going in either direction. Do this in subway stations and all other major points of public population concentration. I guarantee that over time this will absolutely diminish the number of people walking the wrong way, diminish angry encounters and provide moral support for those who try to move correctly in tight spaces.

Suggestion #2: Put up signs at the bottom of escalators that say "Stand to the right." Obvious.
Suggestion #3: Oh, by the way, fix the escalators. Persistently broken escalators and elevators is not only discouraging and depressing to all and mean to people with baby carriages, but it's also in violation of the Disability Discrimination Act, 4.7, which states that: "From 1st October 1999 a service provider has to take reasonable steps to change a practice which makes it unreasonably difficult for difficult for disabled people to make use of its services." Let me tell you, when Exile's left knee was messed up and she was swinging around on crutches, walking up three flights of stairs to get to the surface from the D train seemed "unreasonably difficult", provoking tears on several occasions. The escalator going to and from the D train platform at 34th Street was broken for over a year! Does this seem "reasonable" to you?
Suggestion #4: Hire a lot more people to clean up around this filthy city, and not at minimum wage, either. Call them something cool like Urban Hygiene Technicians. And train them. Dress them in good-looking uniforms designed by Pierre Cardin. Give them the power to give out tickets for littering at $50 a pop. Send them to less fashionable neighborhoods. Make, don't ask, garbage producing businesses pay for this work force with a garbage tax levied at a rate based upon an estimate of customers or readers served. McDonald's, AM New York, The New York Post, Taco Bell, Pizza Hut, Starbucks and their fellows will scream but they will not leave New York City if this is done. But all of us will experience a higher quality of life which, as Mayor Giuliani correctly decided, is fundamental to keeping down crime and making New York even marginally more livable.
Suggestion #5: Put recycling cans in every public place. Every public place. Make companies pay for their own collectors in front of their big buildings. In Germany, every train platform and bus station has a neat, well constructed box that contains three enclosures for garbage (black), paper (blue) and metal and plastic (green). The City or MTA could be enterprising and sell the recyclables thus making some money to pay for the Urban Hygiene Technicians (or someone to sit inside that dark, empty token booth). And we can also in this way teach our children well -- and our own lazy selves, too --  to be conscious of the planet. 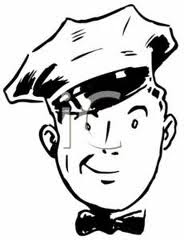 Suggestion #6: Hire Quality of Life Inspectors for the subway system. These QLIs would also be neatly uniformed (I imagine crisp white suits, like milkmen, and neat little black bowties). They would quickly remove people who beg, play their devices too loud, busk, sell things, or do anything to disturb the riders inside subway cars. Everyone in Harlem knows that when school lets out, the subways in our area become rife with gangs of teenagers who think nothing of scaring citizens minding their own business just for fun. QLI would work primarily from noon to midnight which is when most of this unwanted activity occurs. There need not be many of them, but they will travel in squadrons and appear randomly on the various lines. The gratitude of the paying passenger would know no bounds.
Suggestion #7: Help homeless people. Help them. Not to mention all of the rest of us --  by giving them places to live and people to take care of them. Since we absolutely know from the experience of other cities that doing this is actually a lot cheaper than paying the $800,000 in unpaid emergency room visits that is incurred every year by the average homeless person, one can't help but wonder why you, New York City, persist in keeping these folks on the street and in dire straits. Hm, pay less money to decrease suffering. Now there's a thought.
Suggestion #8: Institute CCZs just like London has.  Within Congestion Charge Zones, which are marked with highly visible signs (see left) and on city maps, a payment of $12 a day would be charged either to a driver's EZ Pass or by mail to the owner of the license plate via Automatic Number Plate Recognition. Failure to pay the CCZ charge would result in a fine of $200. With this already proven system, the City would decrease traffic in congested zones AND raise money for the transportation system to pay for Quality of Life Inspectors and City Hygiene Technicians.
The bottom line for New York City is that it's got to stop pretending that the same level of social organization, rights and privileges can exist here as exists in Boise, Idaho. The unnatural congestion and issues of this massive city need to be addressed firmly and quickly. Or I won't be the only one waiting in the station with a one-way ticket to Tiny Town.
Posted by Dorothy Potter Snyder at Friday, September 10, 2010