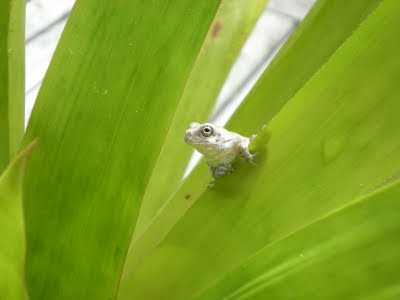 There was a moment this hurricane weekend when I thought, "I am afraid".

We have only owned this house in Piedmont for two months and we've lived in it for only six weeks. We only just got the custom blinds installed in the kitchen, and I know hurricanes: They mess stuff up.

When I was poor and landless and living in New York City, I loved hurricanes. I loved the mess they made, the hole they tore in the control freakiness of the big city. Once, I spent a weekend on Fire Island in the teeth of one of them, running around on the beach nearly naked, screaming challenges at the wind, and then creeping along the boardwalks behind the dunes where tiny white-tail deer were waiting motionless in the swamp for the storm to pass. I rejoiced then in the destructive force of the wind. I didn't worry about getting hurt, or things getting hurt.

But I have lost that urban brashness. Now I have something of serious worth that the hurricane could take from me. Now I am different. I have trees.

As we stowed the patio furniture, stacked the cushions in the living room, and packed the two-car brick garage tight with our two cars and everything else that might turn into a missile in high wind, what tore at my heart was the trees, these magnificent trees that have enchanted me from the first time we drove up to our new house. We have only just met each other, these trees and I. There are huge, mature willow oaks at the front and back, venerable natives of North Carolina with great, grey trunks. There are girly pink, bobblehead crape myrtles in the backyard with their slick, peeling skins, and the fluttering, lacy dogwoods who gather beneath the oak canopy. There's the row of Leyland cypress which somebody planted too close together some years ago along the northern border of our property and which I've promised to prune hard come fall, and there's the spindly, young pear tree standing tentatively next to the back deck. And then there are those old men, the native North Carolina long needle pines, straight backed giants in the woods out back, and our squat, bodacious Brunswick fig with its leaves like big flat hands, blowsily overspilling its protected spot in back of the garage. And there, there by the back gate, is the bay tree standing spit-shined and dark green, stiff like an obedient schoolboy in his brand new suit.

I cannot protect them from the hurricane. Neither, with all of our preparations, can we protect ourselves from this storm if she wants to take us. But in my heart, it's the trees, the trees. Will the trees make it through?

Before the storm, the air goes quite still. For a day before it hits, a gray wetness hangs in the air making the atmosphere heavy and motionless. The birds go silent, group by group, and all crawling and flying things shut down for business except for the frogs that start gathering closer in to the house, one very large one even appearing at a kitchen window as if sent by the amphibian world to warn us. Storm, says the frog with his googly eyes. And then he disappears into the bushes. Soon then come the wet globs of something not really rain, just drops of sweat flung from the brow of this monster dancer, hurricane Irene.

FF occupies himself assembling the new wet vac, taking the battery powered sump on a test run and reading the directions for our last line of defense against wet basement: the hand operated bilge pump. I flit and fret around the house filling water bottles and bathtubs, feeling unsettled, and worrying for the trees. In the calm before the storm they go still, gathering themselves as if taking a big, collective arboreal breath. And when the wind gusts start up, we watch as their great crowns sway and bend with the wind, tossing leaf clusters, dry twigs and needles down to the ground like candies from some massive piñata. The noble wood, more flexible than we could imagine, bends and bends hard. But it does not break. And Irene, who capriciously decides to pirouette just enough to the East to save us all, leaves the sky a wooly white, throws some trash on the ground and turns her attentions elsewhere.

Piedmont, it seems was just out of reach. And while the coast was slammed, we were merely put through our paces. Irene laughs as she lumbers on, gathering her wide skirts around her. The TV maps show her moving north, towards our friends and family up Virginia way and on to Tiny Town and New York City where some await her, huddled in apartments. There in New York City mass transit is shutting down and people are evacuating from low lying areas. I think of my friends, stuck uptown by the closed GW bridge and the shut-down subway system, and I am concerned. But my heart also does a little happy dance that I am here worrying about trees, and not there depending on the works of man to save me.

I am in Piedmont where people handle storms with chainsaws and and generators. I am in Piedmont, where the forest and the hills are my fortress, and where the trees are braver and wiser than I shall ever be.